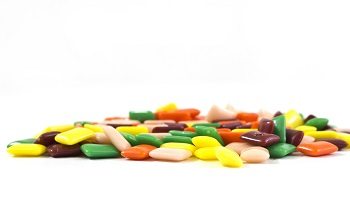 Find Out What Type of Gum Your Child Should Be Chewing

If you allow your child to chew gum, we have a few suggestions to pass along to you. In this article, we’ll talk about how old your child should be before chewing gum and the types of gum that are best for your child’s teeth.

What’s the recommended age for my child to chew gum?

The American Academy of Pediatrics (AAP) recommends that gum not be given to any child too young to comprehend the dangers of swallowing it. Swallowing gum can lead to a host of health problems for children, including abdominal pain, gas, diarrhea and mouth ulcers.

In their recommendation, the AAP refers to two studies involving four-year-old children who repeatedly swallowed their gum, and subsequently experienced terrible bouts of constipation and had to undergo surgery.

As an interesting side note, William Wrigley Jr., in what’s believed to be the first instance of direct marketing, mailed free sticks of gum to every address in the U.S. phone book with a message geared towards two-year-old children to begin enjoying Wrigley’s gum.

In his letter to two-year-olds, Wrigley encouraged the chewing of gum because it was “good for children’s teeth, which need more exercise than they get with modern soft food.”

Of course, this was during a time when there was little research showing the harm that chewing gum containing sugar could do to a child’s teeth.

What kind of gum should my child be chewing?

For starters, be sure that the chewing gum package contains the seal of approval from the American Dental Association, as they’ve been shown to meet the ADA’s criteria for safety and effectiveness.

The key is to avoid chewing gums made with real sugar. The gums approved by the ADA have been sweetened with non-cavity inducing sweeteners.

By partnering with us here at ABC Children’s Dentistry in San Diego, we’ll work with you in developing an individualized plan of action for maintaining your child’s teeth.

1,576 thoughts on “Find Out What Type of Gum Your Child Should Be Chewing”