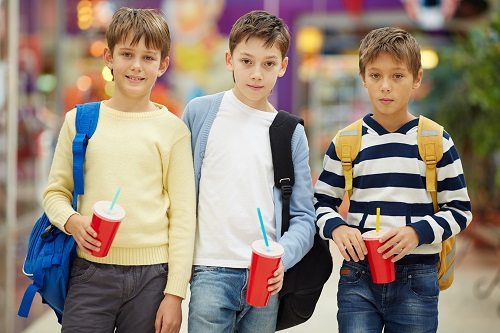 While an ice-cold soda may temporarily take care of your thirst, it’s also doing great harm to your teeth. Because a child’s teeth are still developing, their mouths are especially vulnerable to the dangers of soda.

In this issue, we’ll talk about the harm sodas can do to your child’s teeth and provide information on the negative impact they can have on your child’s overall health.

How Do Sodas Harm A Child’s Teeth?

Chemical-based acids found in many sodas and sports drinks can actually eat into your child’s tooth enamel – the natural barrier that protects our teeth from decay and cavities.

In fact, a study carried out in 2013 confirmed that habitual drinking of sodas can erode teeth in much the same way as consumption of illegal drugs (methamphetamine).

“The citric acid present in both regular and diet soda is known to have a high potential for causing tooth erosion,” said lead researcher Dr. Mohamed A. Bassiouny.

Other Reasons Soda is Bad For Youngsters

TIME magazine published results from a study revealing that while sugar-sweetened sodas are a leading contributor to childhood obesity, they are also linked to behavioral problems in youngsters.

The researchers found that children as young as 5 who regularly drank sodas were more likely to show signs of aggression, withdrawal and difficulty paying attention.

Water Is The Best Beverage of Choice For Your Child

An article published by the American Dental Association provided some very good reasons why the beverage of choice for you and your child should be water.

Here in California, our water supply does have small amounts of fluoride added to it.

We’re all about making sure your child’s teeth are healthy and strong. Since each child is different, our approach is customized to fit their unique individual dental needs.

1,189 thoughts on “Find Out Why Sodas Are So Bad For Your Child’s Teeth”