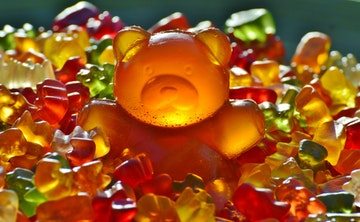 Here’s The Lowdown on Gummy Vitamins

Gummy treats have been around for a long time. In recent years, though, the gummy bear grew up and became a way for kids and adults alike to get a vitamin dose by eating a gummy.

It’s a trend that’s definitely caught on. The New York Times reports that gummy vitamins account for $1 billion of the $41 billion supplement market in the U.S. – that’s a greater than 25% jump in sales since 2015.

But are gummy vitamins good for your child’s teeth? We’ll find out in this issue.

But what can be bad about my child eating a gummy vitamin?

Beyond the extra sugar and calories, gummy vitamins are meant to taste and look like candy. This could lead to your child taking more than is needed, which can be extremely dangerous – especially if the gummy vitamin contains iron, which our body needs in small amounts only.

Also, because they’re sticky and chewy, gummy vitamins are more likely to cling to your child’s teeth and increase the chances of cavities.

Does my child even need vitamins?

According to The American Academy of Pediatrics, as long as your child is receiving a well-balanced diet, there’s really no need for vitamin supplements. Large doses of certain vitamins (A, C or D) can produce horrible side effects, including nausea, rashes, and headaches.

1,170 thoughts on “Here’s The Lowdown on Gummy Vitamins”