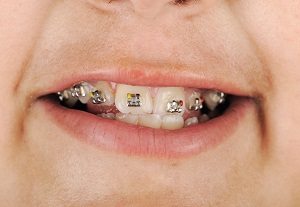 How to Know If Your Child Needs Orthodontic Treatment

By the age of 7, your child’s mouth will most likely have grown to a point so that a dentist will be able to tell how it will develop when permanent teeth begin to emerge. If there are potential issues on the horizon, orthodontic treatment may be needed.

In this issue, we’ll delve deeper into the issue of orthodontics, and talk about why the treatment may be necessary.

Why is orthodontic treatment necessary?

What are some examples of orthodontic treatment?

Treatments consist of both fixed and removable appliances. The fixed ones include braces, fixed space maintainers and specialized appliances attached by bands.

The removable appliances include –but are not limited to – aligners, headgear that straps around the back of the head, removable space maintainers, lip and cheek bumpers, and removable retainers.

What are some conditions that would require orthodontic treatment?

Among the conditions that orthodontic treatment would benefit are:

When should I talk with my child’s dentist about orthodontic treatment?

As soon as you notice or suspect any of the above conditions, it’s time to have a discussion with your child’s dentist.

Sometimes, some of the issues may be caused simply by baby teeth coming out too soon, accidents or thumb sucking. Genetics also can play a part. For example, if you or someone in your family has needed to braces, there’s a good chance that your child may also.

If you think your child would benefit from orthodontic treatment, get in touch with us here at ABC Children’s Dentistry. We’re committed to providing customized, caring and fun dental care for your child.

1,051 thoughts on “How to Know If Your Child Needs Orthodontic Treatment”