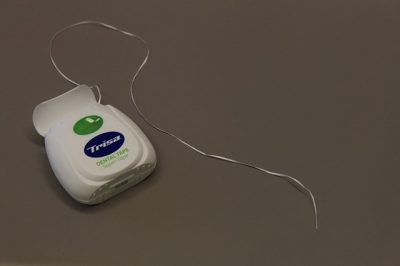 One of the best things you can do in looking after your child’s teeth and gums is to teach him/her to floss.

In this issue, we’ll talk about why flossing is so important.

Studies tell us that using a tooth brush only cleans about a third of a tooth’s total surface area. Because your child’s teeth need to be cleaned thoroughly every day, flossing is vital to healthy and clean teeth and gums.

It’s the cleaning between the teeth by flossing that will do a better job of removing plaque – that sticky film on our teeth that holds the bacteria that feeds on leftover food and sugar in our mouths. When the bacteria are feeding, an acid is released that can gradually eat away at the enamel.

When Children Should Begin Flossing

Parents can begin flossing their child’s teeth when only the baby – or primary – teeth are in. When the child is between 2 and 6, their teeth should begin fitting in more closely together. It’s during this time that parents should get their children into the habit of flossing.

A good way to get children accustomed to using the floss tape is to tie the floss into small circles so the child’s fingers can fit. This helps them to get used to the sensation of the floss and the grip needed to keep it in place.

It’s common for the gums to bleed at first. After a few days of regular flossing, the gums should be healthier and the bleeding should stop.

There’s much more to taking care of your child’s teeth and gums than simple brushing. To learn more, call us here at ABC Children’s Dentistry in San Diego.